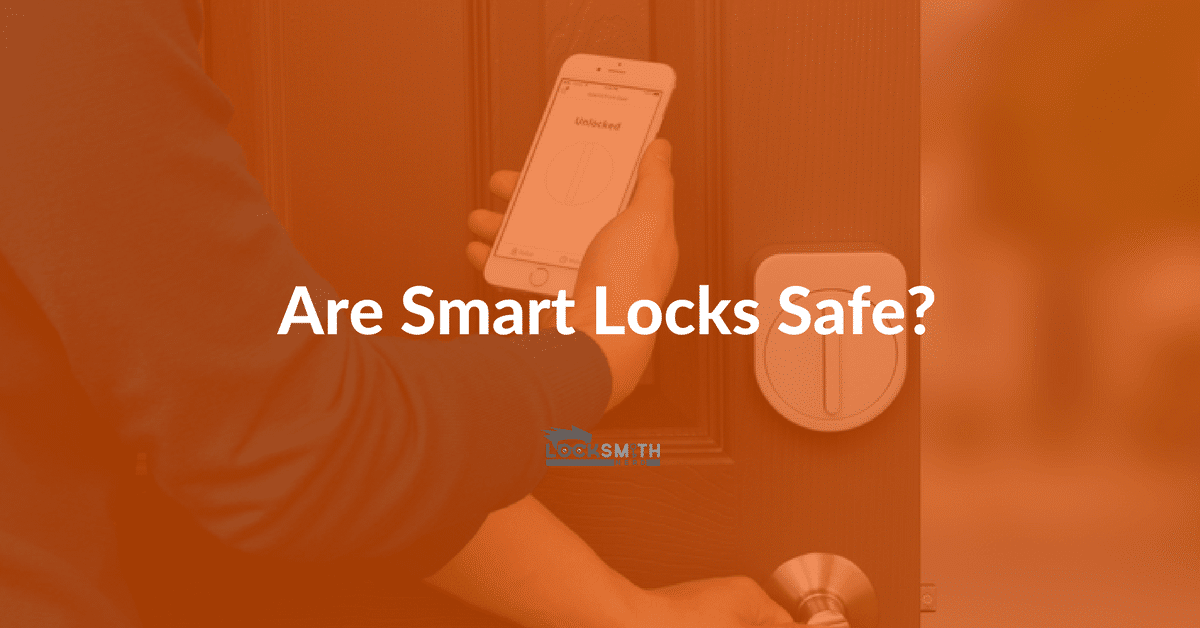 All of us have this question, only a few have the answer.

There are people out there who think smart locks are, well, dumb. Others, who also have used them over the years, vouch for their safety.

The truth, however, lies somewhere in between. To put all smart locks in one category – be it that of “FUNDAMENTALLY INSECURE” or “TOTALLY SAFE” – would be akin to putting all our eggs in one basket. What we need to do, on the contrary, is to choose which smart lock deserves our trust.

And how could we do that, I hear you ask? As I’ve stated earlier, the answer to the safety question depends on who you ask it from. So to retain objectivity, I’ve decided to include both viewpoints – with references – in this article. It is for up to you to decide which one feels closer to your heart.

What makes a Smart Lock Safe?

They take away keys from you, for one. Police figures that the majority of burglaries take place when homeowners place their keys under the mat. The same figures showed that 6000+ burglaries took place in 2014 when the thieves were able to find poorly hidden keys.

That is where keyless smart locks help.

By taking away keys once and for all, a smart lock denies the burglar that wee bit of leverage which they need to break into your home. And since there are smart locks out there that replace keys with e-protocols, phone locating mechanisms and sharing keys – all of which are additional security protocols, it becomes next to impossible for an ordinary burglar to break-in.

What makes a Smart Lock Unsafe? As shown by a team of security professionals, smart locks can be hacked. Worse, the team was able to hack more than eight brands of smart locks with hacking tools worth, hold your breath, 100 bucks. Talk about the return on investment, eh?

Dig deep, however, and smart lock enthusiasts will find one thing reassuring from the abovementioned research. During their testing, the team was not able to find a way through 4 of the 16 Smart locks – which included August, Kwikset, Noke, and Masterlock.

Another such article, this one by Liam Tung on ZDNet, showcased a flaw in the Amazon Key – a service which allows Amazon to place the goods inside the homes of Amazon’s Prime Customers, and which works in tandem with a smart lock.

Once again, the devil lies in the detail. Though he was able to indicate a flaw, Liam WAS NOT suggesting that Amazon Key was fundamentally unsafe or that it compromised the security of your home. What he was suggesting was that there was a flaw, and which needed looking-into by Amazon.

When not in use, disable Bluetooth on the smartphone which has the smart lock app. Believe me, it will make life difficult for the would-be hacker.

Some people think that smart locks are all codes and passwords – but since they have to operate in the real world, an ideal smart lock needs to resist the use of brute force. After all, what use is Bluetooth encryption of if all it takes is a brick to damage the lock beyond repair.

Thankfully, some smart lock manufacturers are paying attention to this detail.

Take, for example, the Schlage Sense which is a smart lock making all the right noises. It is rated Grade 1 by ANSI, which means it can withstand 10strikes of 75lbs of force. That means a margin of at least a couple of minutes in which you – or someone in the neighborhood – might draw out a contingency plan.

What’s more, and this is more important, this smart lock has a security alarm which will start sounding the moment it feels something is amiss. You can set the volume of this alarm as high as you want so as to alert the whole neighborhood even when you’re not at home.

Therefore, in addition to providing a physical resistance to the use of force, the Schlage Sense also has an electronic contingency plan.

As you might guess, not all smart locks are rated Grade 1 by ANSI. And even if they are – as Schlage Sense do – their prices would be so astronomical that you might consider against buying them.

Which Padlocks to Avoid?

How to Identify if a Particular Smart Lock is Unsafe?

There’s no one way in which a smart lock would showcase its inadequacy. Still, we’ve listed down the top three which you can identify with ease.

A major reason why some of the smart locks get hacked is that they use unencrypted passwords. Such locks store their password in the form of plain text – thereby sending an open invitation to a resourceful burglar to hack them.

As suggested earlier, smart locks are graded based on the level of physical security they provide – with such grades ranging from 1 to 3. Sadly, there are smart locks on the market which are unable to be graded by ANSI due to their incompetence. Still, these smart locks find a way in the market. Therefore, it is imperative for you to check a lock’s grade before considering it for your home.

A Smart lock is just like your Laptop’s Operating system – it gets more secure with every update. This is especially true these days as never-seen-before viruses are making their way into the Online world. Hence, make sure your lock’s manufacturer sends consistent updates/bug fixes.

No one can say that all smart locks in the market are safe (or unsafe). What matters is the features of that smart lock – and the brand which is manufacturing it. Similar is the importance of grading as smart locks which earn good grades from reputed organizations do well under duress.

Don’t know where to find a lock with such characteristics? You can opt for the above mentioned Schlage Sense. It is rated Grade 1 by ANSI, has some brilliant security features and uses encrypted passwords to protect against hacking. While it is not bulletproof – no lock in this world is – it will take a very resourceful burglar to get past it.