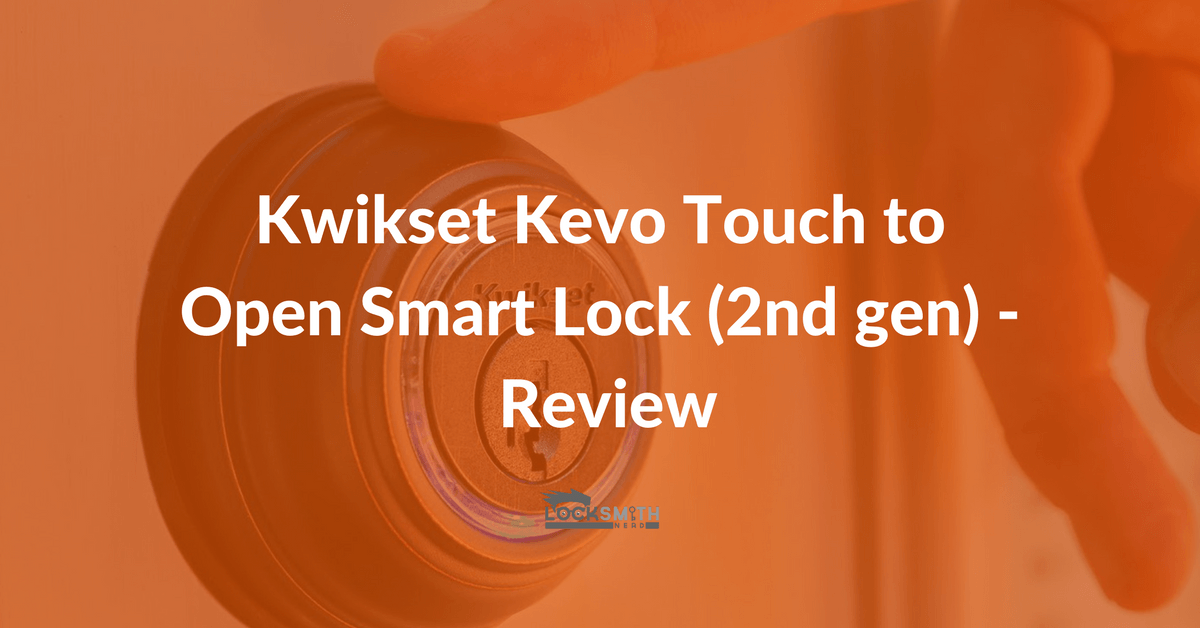 Let’s be clear on this.

Smart locks, like traditional locks, are NOT bomb proof.

That said, there are reasons why they cost astronomically. For starters, they take away keys, thereby taking the complexity out of your lives. Add to the mix their ability to provide control and access from remote locations,  and they are WAY better than your existing deadbolt. Agree with me on this? Kwikset Kevo Touch to Open Smart Lock (2nd gen) might just be right for you.

Unlike most smart locks, the Kevo 2nd generation doesn’t fully rely on your smartphone. Rather, if you have lost your smartphone, your fingerprints will come to the rescue. All you have to do is to tap on the lock three times, and it will let you in.

Impressed by this feature?

Things To Consider Before Buying A Smart Lock

Since you would be paying a sizeable amount, you should ask a few questions about smart locks. To make sure these questions lead you closer to the perfect choice, I have listed some of them.

What makes a Good Smart Lock?

Nope, the price isn’t the only determinant – though it may be the most important one. A good smart lock is one which offers a combination of convenience and security. Yes, the most important goal is to keep your home safe, but the lock should provide easy installation and usage.

Next, if you are already using some of the smart home products – such as Amazon Echo or Apple’s HomeKit, make sure your smart lock integrates with them. And since you’d be using it via its app, a smart lock’s app should be user-friendly, intuitive and easy-to-use. For, nobody wants to be lost in the programming jargon just to open their front door.

Before buying any smart lock, download its app on your phone. Try to go through every function of the app to make sure it is easy to use.

How to Determine a Smart Lock’s Security Level?

There are two ways you could do that. First is the old-fashioned way in which you install the lock, and wait for the burglar to test the lock’s mettle. Luckily, since we’re in the 21st century, we can discard this method for its safer version. If you want to gauge the level of security a smart lock provides, look at grades given to them either by American National Standards Institute (ANSI) or Builders Hardware Manufacturing Association (BHMA). The grading ranges from the most secure, commercial-level security (Grade 1) to the least secure, residential-level (Grade 3).

The best smart locks have these grades engraved on their package. Before checking for any other feature in a particular lock, try to check its grades. Only then you can be sure that the lock would let you enjoy its other, shinier features. Two such features which you’re more likely to benefit from are auto-locking and auto-unlocking. While the former would lock the door every time you’ve left it open, the latter will unlock it sensing the proximity of your phone. And if you feel they intrude too much, both can be disabled at any time.

Another such useful feature is that of Guest Access. This feature is more useful if you live in a shared apartment. Just like a key, everybody could have their own access codes to get in. More importantly, in case anything goes wrong, you’d know who to blame just by looking at the entry, exit records.

What is Kwikset Kevo 2nd Gen?

Put simply, the Kwikset Kevo 2nd gen is a Bluetooth-enabled deadbolt which lets you in with just three taps. Once you open its delivery package, you’d get a smart key tool which lets you make your own smart key so that no other person – not even the manufacturer – can open the lock without your key.

Made from durable metal, it is available in three standard colors and comes with a key slot. Around the lock is a blue LED ring which will flash red every time it rejects an unlock attempt, or green when it is unlocked.

In comparison with its 1st Gen counterpart, the Kevo 2nd Generation is sturdier yet compact. The inner housing has been made neater and it occupies less space as well.

More importantly, the 2nd Gen model is much stronger – meaning burglars can’t force it open with the brute force of their attack. Another welcome change which I witnessed, the “eKeys” – which grant Guest Access, are both unlimited and free.

Be it setup, operation or troubleshooting, the Kevo App would be essential. It is available in Spanish and English languages, has both iOS and Android versions, and gives you the option to print the instructions in PDF should you don’t want to look at your phone during the installation procedure.

Or if you like, there is a step-by-step visual guide to lead you through the installation process, which will take around 30minutes to a novice. Afterwards, you can use the app to lock and unlock the door, keep a log of entries and exits and send eKeys to your loved ones.

It doesn’t matter which smart lock you’re going to buy, it would give you the freedom to remotely unlock and lock your door. However, the fact that this feature is omnipresent doesn’t mean that it comes for free.

For, as far as this smart lock is concerned, it relies on Kevo Plus to offer remote access. Though no monthly or annual fees are involved, Kwikset Kevo would require you to pay a one-time upfront price of $99 for the Kevo Plus.

Apart from giving remote access, the Kevo Plus feature offers other benefits as well. For, it can use Wi-Fi to connect to your smartphone – Kevo 2nd Gen only uses Bluetooth - and will monitor the status of the lock throughout the day.

To ensure its security, the 2nd Gen Kevo relies on three methods. Let’s look at each of them one by one.

With the media giving so much attention to hackers, it seems to a layman that smart lock is an open invitation for a burglar. Thankfully, during the review, I found this smart lock to be exactly opposite – and nearly bulletproof.

Every time you’d open the door, your key’s fob will send a password to the door, telling it to open. If this password remains same every time, a hacker could listen to the Bluetooth frequencies – before saving your password for their unscrupulous use.

That’s where the Kevo E-Key Protocol comes into play. Every time you enter the syncing process, the lock will give an encrypted formula to your phone. To further secure the whole procedure, the formula would be new every time– yes, EVERY TIME – you use the lock.

It means that even if someone has overheard your password, they won’t be able to use it as the smart lock would have replaced it by then.

As their name suggests, sharing keys are ones you share with your loved ones to give them access to the smart lock. However, the sharing keys are not a lifetime pass – rather you can set a time frame during which they would function.

For example, if your friends are coming over the weekend, you can send them time-bound keys. Consequently, once the weekend is over, the keys will automatically de-activate, hence becoming useless for any future usage.

One of the most underrated security features of this phone is the one where it tracks your smartphone’s location. For instance, if your phone is inside, the lock will know that and nobody – but you – can open it from outside.

Most of the modern smartphones are compatible with the Kevo 2nd Gen. I say most, because to support this smart lock, your phone needs to have Ultra-low voltage Bluetooth.  Nowadays, most smartphones have this feature, but some do not. I would recommend checking beforehand whether your phone supports it or not. A great compatibility feature which comes with the Kevo 2nd Gen is its ability to connect with the NEST Thermostat. Assuming you’re away, the smartphone will drop the heat of the NEST Thermostat, before increasing it once you arrive. Apple’s HomeKit, Android Wear Devices, Ring Video Doorbell and Honeywell Connected Thermostats are also compatible with it.

If you think I’ve been bluffing since now, a mere glance at the below-mentioned reviews will prove the veracity of my claims. Though I don’t say it for many products I use, the Kwikset Kevo 2nd Gen works like a charm. Apart from making getting in and out of your house easy, this lock will let you get rid of keys once and forever. It opens with the touch of your finger and locks as easily.

More importantly, the lock is virtually bulletproof in addition to being easy to use. Since it uses encrypted Bluetooth passwords – which it changes after every unlocks attempt – it would take a very dedicated (and resourceful) burglar to get the better of the Kevo 2nd Gen.