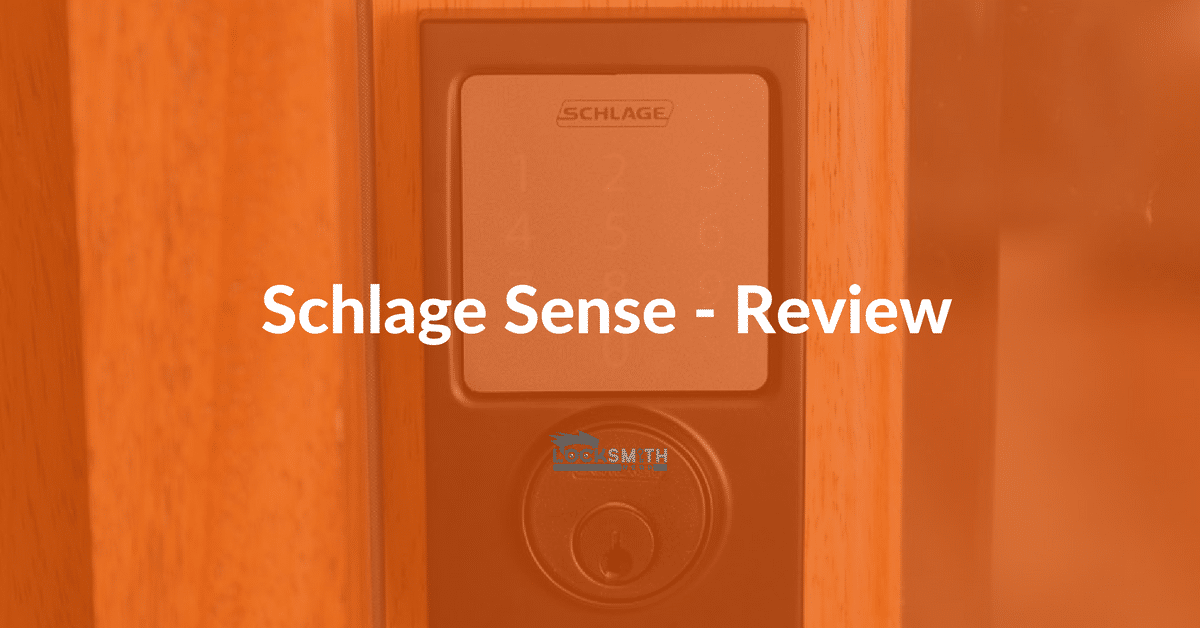 I think some people would agree with me if I say:

Smart Locks are a wastage of money.

Well, nothing is unbreakable, and least of all smart locks. That said, smart locks have evolved over the years – and Schlage Smart locks are no different. And that is where the Schlage Sense Review comes into play.

Apart from receiving AAA rating in hardware security, Schlage Sense is electronically secure as well since it regularly receives firmware updates from its manufacturer. Therefore, just like your tablet or laptop, each new updates makes this lock more secure.

Quick Navigation
What to Know Before Buying A Smart Lock
Is Your Door Smart Lock Ready?
Pick A Protocol
BHMA/ANSI Rating
Other Features
What Is Schlage Sense?
Design
Can You Install it yourself?
What about the App?
Features
Social Proof
Schlage Sense Conclusion

What to Know Before Buying A Smart Lock

Before looking at the Schlage Sense Review, you should know a thing or two about smart locks. However, if you feel that you already know more than enough, you can skip this part and go straight to the review section.

Is Your Door Smart Lock Ready?

Firstly, lock/unlock the door manually. Did it need you to push/pull it for turning the bolt? If the answer is in the affirmative, your door is NOT smart lock ready. For, smart locks operate without any supervision and they don’t like being shoved one bit.

Second, while turning the bolt, did it extend easily into the door jamb? If not, here is another problem because smart locks require bolts which can fully extend, with ease. And if there isn’t enough depth in the door jamb, either you may burn your smart lock’s motor or it may damage your door.

To check whether or not your door is smart lock-ready, download that smart lock’s app (i.e. Schlage App in this case) which you are planning to buy. Most smart lock apps come with a pre-installation guide, hence helping you to size everything up.

How will your smart lock communicate with your smartphone? Yup, via its protocol, and there are three such protocols mostly used by all smart locks. In addition to the Bluetooth Protocol – which the Schlage Sense uses, other two protocols include Z-wave and Wi-Fi. Most people prefer Bluetooth locks for the reason that they are usually cheaper than other two protocols. Also, these smart locks are known to have large battery timings and their batteries do not need frequent replacement as well.

Still, there’s a reason why Wi-Fi smart locks come at a premium: their range is impeccable. You can control Wi-Fi locks from as far as 300feet – whereas the maximum range of a Bluetooth Smart Lock is only 100feet, at best.

Just like your traditional lock, a smart lock would need to withstand physical force or else it will give an open invitation to a burglar. And there is no better way to gauge how secure a lock is than to look at its ANSI/BHMA rating.

These ratings categorize the lock on the basis of three particular features: security, durability, and finish. If your smart lock has AAA or A rating, it means it is ranked in Grade 1 which is the best of three grades. If not, you may want to look elsewhere as the lock may not be durable and/or secure.

Next, you may want to look at the letting-in mechanism of each smart lock. Some of them will automatically unlock sensing the proximity of your phone. Others would require you to punch-in your keyless entry code.

Lastly, never buy a lock before looking at its app – for a smart lock is only as good (or bad) as its app. Does the app records incomings and outgoings? An option to auto-lock? Does it include a built-in alarm? What about the guest access feature?

Did You Know:  We have a detailed article listing down the features which separate an ordinary smart lock from a not-so-ordinary one. Should you feel like reading it, click here.

What Is Schlage Sense?

Coming from a 98-year-old lock-making company, Schlage Sense was unveiled for the first time on Consumer Electronic Show in Vegas in January 2016.

The smart lock allows entry into the home by conversing to your phone. Or, if your iPhone’s battery has died down, it allows you to use its key-pad or the good-old key. Also, it lets you issue temporary passcodes to your guests so that they do not have to wait while you’re outdoors.

Also, in contrast to most smart locks out there, the certification of Schlage Sense is Commercial Grade. That is, it offers more quality in its operation and build than your average residential grade smart lock.

When it comes to design, Schlage Sense doesn’t leave much to the imagination. The best thing about its design is the fact that it is self-contained – meaning all you need is a compatible smartphone for its usage. This feature is not available in smart locks which are NOT self-contained as such locks require either a home automation system or some costly fees to get going.

The lock has two styles: Schlage Sense Camelot and Schlage Sense Century. While the latter uses a square keypad, Camelot goes with the more traditional one. What both styles have in common is a satin-nickel finish to match their outlook to the majority of handles out there. If you want, there are number of designs to choose from to complement the interior décor of your home. For example, the Camelot style offers a bronze finish option whereas a matte black finish is on offer with the Century style.

Can You Install it yourself?

Feel comfortable with a screwdriver? If so, then you can certainly install the Schlage Sense yourself. Hiccups that may arise if/when the door is irregularly sized or when it doesn’t align perfectly. In such cases, you may need the help of a handyman.

Once you have installed the door, sync it with your HomeKit. For this, you’ll need to follow instructions given in the Schlage App. Once the app detects the lock, scan the eight digit code of the HomeKit on the front side of the lock’s manual.

That is, the app will use the camera of your smartphone to read the numbers. Once you do that, you’ll be able to enjoy the features of the smart lock.

What about the App?

Just two words: user-friendly. The design of the app is clean yet appealing whereas its interface is easy to navigate and intuitive. Tap on its home screen’s lock, and you may unlock or lock the door. There will be a small but readable text at the bottom of your screen letting you know the last time the door was accessed.

That said, if you are using other types of gadgets on the HomeKit as well, the app won’t perform great. For example, if you want to sync your deadbolt with your HomeKit lights, the app gives no such option. Nor will it allow you to take advantage of the built-in screen control which comes with every HomeKit.

On the positive side, the app lets you do almost anything which people normally expect from a smart lock. For instance, there is the option of a beep going off with the opening of the door. Then there’s the option of an alarm going off when something is amiss with the lock.

Another notable feature of the app is that it lets you grant access to guests. You can do so by generating a user-specific code – before sending it to the user for whom you created the code. If you want, you can also limit the time for which that code won’t work.

During our review, we came across several methods with which to control the Schlage Sense. Apart from Bluetooth, Apple HomeKit was another notable option. This option gains importance after the Apple iOS 10 Update with which you can control any accessory which “Works with Apple’s HomeKit”. For, Schlage Sense is one such accessory.

Apart from using the Apple HomeKit, Apple is another option to control Schlage Sense. But for that to happen, your Schlage Sense needs to be within range of the Apple TV. Hence, if you want to control it from remote locations, you may need to find a home-automation system with which to connect the Schlage Sense.

Apart from HomeKit integration, some other useful features of Schlage Sense are as follows:

Every user when purchasing a new product relies on reviews. We are no different – and we wouldn’t suggest you to be an outlier as well. It is for this purpose that we scoured the internet to find out what people were saying about Schlage Sense.

If you’re looking for a HomeKit framework to build your smart home, the Schlage Sense deserves your attention. Equally important is the fact that Schlage is a company which is here for almost a century. And also that there are no hidden fees with this smart lock.

Apart from providing the option to open it from anywhere using HomeKit, you can also open it using the Schlage Sense Wi-Fi Adapter. And finally, there’s the feature which lets you generate 30access codes in one go. All in all, a pretty handy smart lock to further decorate (and keep safe) your smart home.